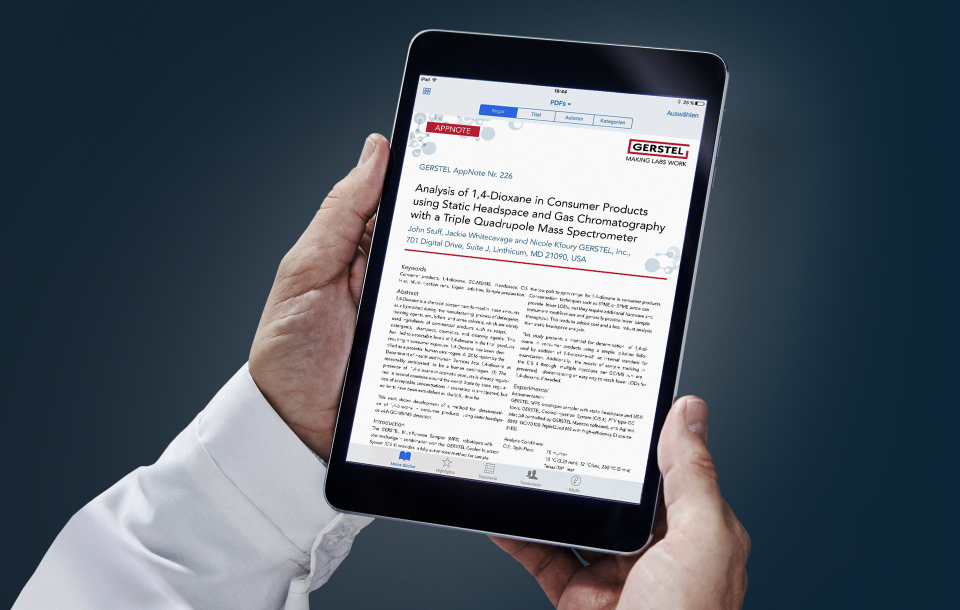 A new fully automated thermal desorption (TD)-GC/MS method was developed for determination of formaldehyde and other airborne carbonyls as well as VOCs for material emission testing. The method includes an automated in-situ derivatization agent loading step prior to every sampling step, thus blank values are avoided. Pentafl uorophenylhydrazine (PFPH) was used as derivatization agent and was automatically loaded onto Tenax TA adsorbent using a dynamic headspace (DHS) technique. Repeat use of Tenax TA adsorbent for loading PFPH and the background of PFPH-CH2O was validated, the usefulness of Tenax TA adsorbent for the analysis, as well as the storage behavior of PFPH loaded Tubes were investigated. The linearity of the formaldehyde calibration curve from 0.2 - 2.0 μg (corresponding to 8 - 81 nmol) for the PFPH/TD-GC/MS method was r2 = 0.9989 with average RSDs of only 1.4 % (4 levels, n=5). The method provided good reproducibility. The limit of detection (LOD) for formaldehyde was calculated according to DIN 32645 to be 0.09 μg (3.0 nmol) and the limit of Quantitation (LOQ) was determined to be 0.25 μg (8.33 nmol). Emissions from e-liquid samples were analyzed using the PFPH/TD-GC/MS method. Formaldehyde and the VOCs and SVOCs normally determined by Tenax/TD-GC/MS were all determined. Formaldehyde was detected in all three samples.